India and England do battle in 5T20 Internationals 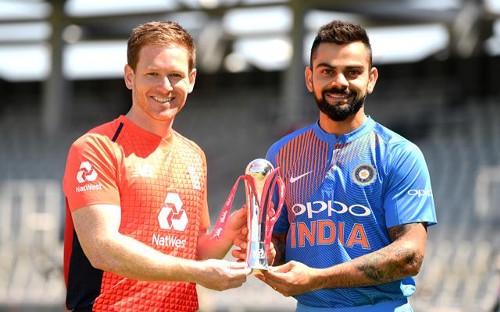 India and England will resume battle again on Friday morning, but this time in a different format. Both teams will be looking to finalise their line-ups for the T20 World Cup later this year. To do this they decided to battle in a five-match series to be played at Ahmedabad. Both sides are amongst the favourites for the World Cup later this year, but how close are both teams to knowing their best line-up?

Both teams are blessed with incredible top-order talent. For India, they have two of the greats of white-ball cricket in Rohit Sharma and Virat Kohli at one and three respectively. The other opener alongside Sharma is likely to be KL Rahul. Rahul has arguably been the best T20 batsman in the world for the last year and a half. However, Sharma’s long-term partner has been Shikar Dhawan. He has recently returned to form and will be gunning to get his place back.

As for England, they seem pretty settled in their top six. We will likely see a top three of Jason Roy, Jos Buttler, and world number one batsman Dawid Malan. Before the World Cup, the likes of Tom Banton, Joe Root, and the discarded Alex Hales will be looking to break into the top order. However, that seems unlikely.

England is much more settled in its middle order than India. They have the likes of Jonny Bairstow, Eoin Morgan, Ben Stokes, and Moeen Ali in their engine room.

India on the other hand has slightly more questions. Since the 2019 ODI World Cup, Shreyas Iyer has made the number four position his own. However, he will have competition from Mumbai Indians pair Surykumar Yadav and Ishan Kishan. If you look outside of the current squad, the likes of Manish Pandey and Sanju Samson will also be pushing for a place in the team.

At number five, the back in form Rishabh Pant is expected to take the gloves back from KL Rahul. The remaining middle-order is likely to include Hardik Pandya and Washington Sundar at six and seven.

It is possible that KL Rahul could be asked to bat at four to accommodate Shikhar Dhawan at the top of the order. Sundar will want to have a good series, with the likes of Axar Patel pushing for his spot and the eventual return of Ravindra Jadeja.

India now has a lot of fast bowling options. It seems as if the only nailed-on starter is Jaspirit Bumrah. Deepak Chahar, Shardul Thakur, Navdeep Saini, Mohammed Shami, Thangarasu Natarajan, Bhuvenushwar Kumar, and the eventual star bowler from the IPL this year will all be vying for not just the squad but a starting spot.

England’s main bowler will be Jofra Archer, who has had a lot of success in India. He is currently nursing an elbow injury, so England will want to protect him for the tournament. To support him, the likes of Sam Curran, Reece Topley, Mark Wood, Tom Curran, and Chris Jordan will be hoping to get an opportunity to show their talent.

There will be other bowlers looking to make their case. The likes of Saqib Mahmood, who before its suspension was setting the PSL alight, as the leading wicket-taker and the immensely talented Pat Brown, once he returns from injury will be looking to make some noise.

Both teams have a world-class star bowler, but they know they have other spots to fill.

Both teams are blessed with an all-round spinner. India has as previously mentioned Washington Sundar, Ravindra Jadeja, and Axar Patel. They are equally blessed with some excellent mystery spinners in Yuvendra Chahal, Kuldeep Yadav, Rahul Chahar, and Varun Chakravarthy. Of course, Chahal is the current holder of the starting spot, but an impressive IPL from any of the remaining names may create some conversation.

England has Moeen Ali and the leg spinner Adil Rashid. These two have been ever-present for England for the last few years. Other options include the likes of Matt Parkinson, but England is not blessed at this position.

Both teams are set up well for not just this series but for the T20 World Cup. This series will go a long way in deciding both side’s opening line-up in October. We can expect a highly competitive series between the two best teams in the world.