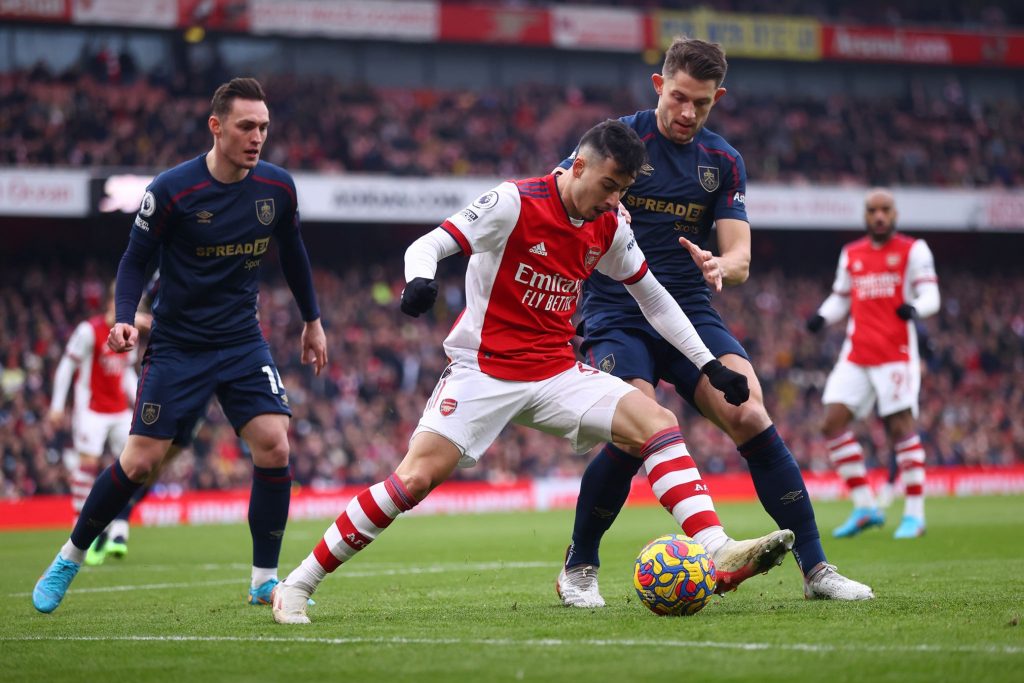 Arsenal vs Burnley. Emirates Stadium. 2pm kickoff. If Arsenal wins they go back into fourth position. Burnley has won one game in the league all season. What could go wrong?

Well, if the start of the game was anything to go by, a lot could go wrong. Burnley started the brighter and created the first opportunity. A deflected cross from Jay Rodrigues looped towards the Arsenal goal and was smartly tipped over by Aaron Ramsdale. From the resulting corner, an unmarked Ben Mee volleyed the ball over.

If Arsenal needed a reminder, Burnley were here to show that they were better than their last place league position.

After that chance, Arsenal began to assert its dominance by keeping the ball. However, Burnley offered up little reminders that they were a dangerous side, especially through a counter-attack led by Matej Vydra.

However, in the 17th minute, Arsenal created their first clear opportunity. A nice give-and-go between Alexander Lacazette and Albert Sambi Lokonga set the Arsenal forward on his way. Unfortunately for the Gunners, his shot went wide of Nick Pope’s goal.

Arsenal launched another attack in the 20th minute. Brilliant one-touch football, which has become the norm during Arteta’s reign, put Emile Smith Rowe through down the right. He pulled it back for Martin Odegaard, whose shot was smartly saved by Nick Pope. The rebound was deflected out for a corner.

Mikel Arteta would have hoped his team would continue to dominate the visitors. However, despite Arsenal finding joy down the right-hand side, they could not make their dominance count.

Both teams had a couple of half-chances. For Burnley, Dwight McNeil’s run into the box was dealt with by Gabriel and Aaron Ramsdale. For Arsenal, Bukayo Saka was put through on the right-hand side on the stroke of halftime. He cut inside only to see his shot go past Nick Pope’s goal.

The first half came to an end with neither side breaking the deadlock. Arsenal fans had come into the game nervous, that first half would have done little to ease their worries. A big second half was required.

The second half started much like how the first half ended. Arsenal continued to dominate possession, while Burnley sat deep and looked to counterattack.

After a quiet first ten minutes of the half, Arsenal had yet to create a chance. This was much to the Arsenal fans’ frustration as the growns around the stadium intensified.

Minutes later, Bukayo Saka’s cross looked for Gabriel Martinelli, however, Burnley was able to clear it away at the last second. Saka was then fouled by Dwight McNeil, which led to Martin Odegaard’s free-kick going just over the bar.

Arsenal again went to another level and so did the fan’s support. Smith-Rowe’s run down the left led to a corner. From the corner, Odegaard found Smith-Rowe at the edge of the box but his shot was brilliantly saved by Nick Pope. With that, the sounds of “Arsenal, Arsenal, Arsenal” went around the Emirates.

Arsenal’s attacks had become relentless. First, a Smith-Rowe’s shot was blocked by James Tarkowski. After that, Kieran Tierney’s brilliant ball over the top found Smith-Rowe. He found Lacazette, who put the ball wide of the goal much to the shock of everybody in the stadium.

Arsenal continued to dominate possession, but that miss seemed to take the wind out of the home side. However, a volley from Lacazette and a header from Gabriel both ended up straight at Pope.

With a minute to go, the home fans did everything to lift the spirits of their team. Unfortunately for them, it was Burnley on the attack. McNeil led Burnley’s counterattack, however, his shot was tipped over the bar by Ramsdale.

Arsenal continued to look for an opportunity. However, again it was McNeil leading a Burnley counter-attack. This time he dragged his shot wide. The full-time whistle went immediately, with a chorus of boos sweeping the Emirates Stadium.

Arsenal missed their chance to go back into the top four and remain sixth. As for Burnley, they get a vital point but remain at the bottom of the table.

Arsenal’s next game is on the 10th of February, away to Wolves. From now until then, the focus will be to address their issues in the transfer market.